All set up and ready for Yarndale tomorrow morning! 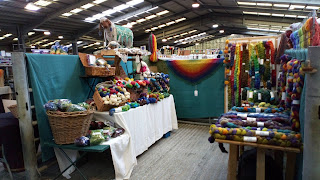 Not quite used to the decadence of doing a major yarn festival from home. No strange beds, no money spent on acommodation, and if we forget anything vital on set up (we didn't this time) it can be fetched the next morning. 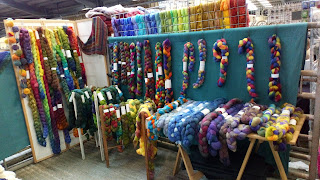 So there we are, all set up. Hope to see some of you tomorrow or Sunday.
Posted by Freyalyn at 18:59 No comments: Links to this post

Today is my birthday, so I thought I'd seize the opportunity of a new year and do something with my blog again. There are also several fibrery things on the horizon which could do with noting down and putting out into the world too.

I have Yarndale in just over a week's time. I seem to alternate years with Yarndale; it's not the most successful show for me (well, it is predominantly geared up for knitters and crocheters rather than spinners and felters), but on the other hand it's only half an hour away and no overheads are required. This year was almost an accident - I decided to apply on the spur of the moment, actually the day after applications closed, but much to my surprise I got in! So dyeing has been happening, both fibre and sock yarn.

A few new colourways as well as the old favourites. The top middle of the fibre photo is Northern Lights - that's one I've had right from the beginning. Always amazes me when it's spun up - in the fibre it seems to be mostly primary colours, but as you attenuate the fibre and spin into yarn the oranges and greens and purples appear as if by magic. There's a whole spectrum hidden in there. 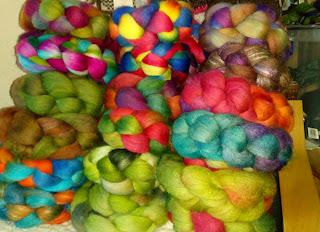 The colour tucked away on the right in this photo really needs one of its own in proper light - it's me having another go at getting a good Brandywine colour - trying to achieve the colour of a still river running off moorlands, deep peat brown in the shadows and deeps and copper and gold over the shallows. 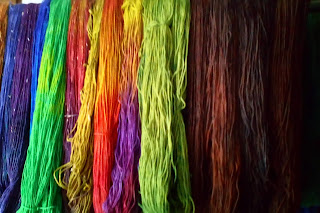 From underneath the drying rack. 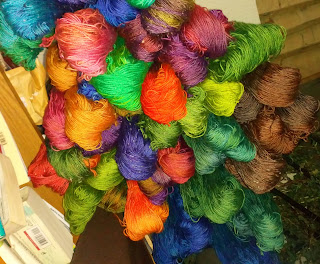 I had today off work, planning to get all the dyeing labelled up. It hasn't happened, but I had a lie in, a trip to Hobbycraft to sort out the last bits of stuff for the weekend's workshop, and two lovely walks with the boyz.

This is the same colourway over two different wools (both coloured). It was very similar to the sunset from Baildon Moor this evening (I've driven up and watched a couple this week, as it draws back towards 7pm, with the skies being so clear and Autumnal.) 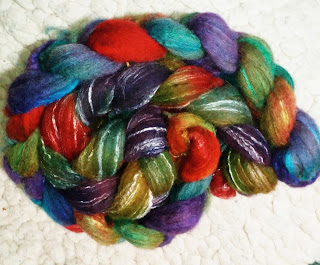 I'm teaching a new workshop for me this Saturday - Felted Slippers. These are my samples. I really ;would recommend not doing more than one pair in a day if you're not used to it; hands tend not to work properly the next day, which can be rather alarming until you remember why. Numbers went up after I'd stocked up on supplies, so a bit of swapping around may be required. But it should be great fun - water and soap and wet wool splashing everywhere! 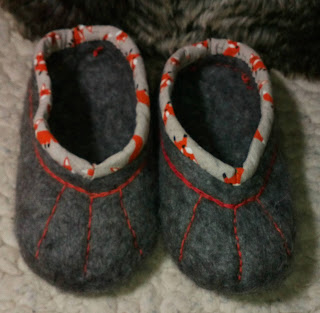 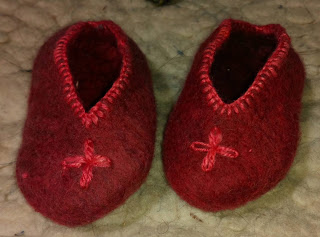 In November I'm teaching a workshop I haven't taught for ages - Spinning and Knitting with Beads. I have various beaded yarns in my box of teaching samples, but I've lost one of the little knitted shawls I had for this workshop, so I needed to replace it. This yarn is spun from a blend of Manx and bamboo dyed in my Selkie colourway, and is threaded with tiny golden seed beads. It will be knitted up into something plain, open and garter-stitchy, so the beads show through on both sides. 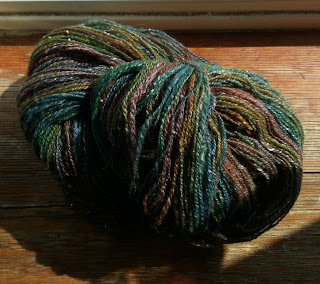 And in October I'm up at Durham Guild, doing my Fibre and Colour Blending workshop. That one's always fun to do, as I basically do a bit of talking, then a bit of demonstrating, wave some samples around, then stand back and let people loose on the drumcarders. This is good example of what can be done. The braid at the top of the photo is my Away Wi' The Fairies colourway, done on white BFL/silk. But it wasn't a single length of braid so it was intended for me from the start. I took half of it, broke it up into chunks in the constituent colours, and then blended each colour into its own little batt. Not only are the colours gorgeous in their own rights, the fibre has been opened up into something even easier to spin, the silk has been blended evenly with the wool, and each colour will go beautifully with the others as they all have a tiny amount of all the other colours within them. They are magically heathery close up. (They've already been spun and plied into a fingering weight yarn - they are destined for a carousel hat). 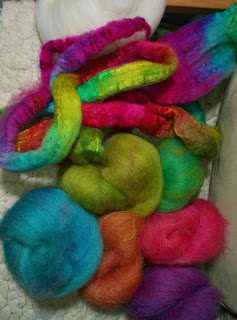 It's been a busy year so far - I've already taught at three Guilds, plus the workshops at Wonderwool and the wool shows I've done. Next year is already well underway in the planning - I am teaching spindle-spinning at Wonderwool again (by popular demand!!) and there is the possibility of something foreign and archaeological happening next September.

But there we are. Now, can I continue the momentum?
Posted by Freyalyn at 20:30 3 comments: Links to this post