It's been a dark and sad time of the year, and I have failed to do more than a couple of commission dyeing projects recently, and the shop is still resolutely empty, despite having fibre in the current issue of Ply magazine.

The Solstice is technically 4am tomorrow, but I shall feel the world's tipping today, and look forward to the return of Light and Warmth and Growth and Life.

Solstice Blessings to you and yours. 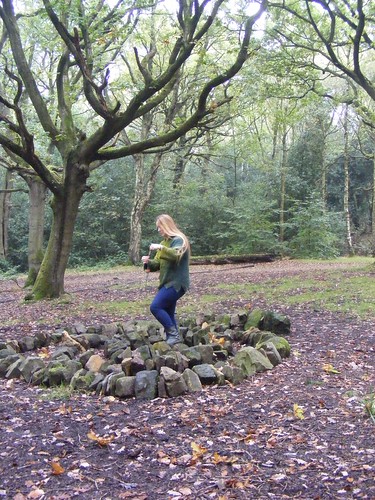 Posted by Freyalyn at 07:13 No comments: Links to this post

Samhain, and the year's ending

Yesterday was the old Celtic New Year. Happy New Year and blessings to us all.

A little bit of dyeing was done last week. I had a commission and a birthday to do, so I dyed Triton over all three colours (chestnut, grey, cream) of Merino d'Arles and it came out rather wonderfully.

I'm now languishing in the end of a cold that made back to back shows of Bakewell and Kendal very hard, though it was lovely to see so many people, chat so much (though my voice had conked out by Kendal) and catch up.

I'm off on a short break with friends in Somerset this week coming. Sleep is what I'm mainly looking forward too - trying to work full time while doing wool shows at weekends is very hard work.

The Etsy shop will be updated before the end of November. In the meantime, the fibre is all in the flat so give me a shout if you fancy a colour or fibre: I have Merino d'Arles, grey and white Shetland, black Shetland/silk, bfl and bfl/silk in white/oatmeal/black, and a few other bits and pieces.
Posted by Freyalyn at 03:02 No comments: Links to this post

As some of you know, my father died a couple of weeks ago. The funeral is tomorrow. It's going to be a bit of an event, and life has pretty much been on hold until it's over.

For various reasons, I hadn't booked a stall as this year's Yarndale. As it happens, I'm pretty sure I wouldn't have been organised enough to manage it, though Mark would have done his best to herd me through it. We went as visitors instead, and it was lovely - some people knew about Dad and I got hugs and love, some people didn't and that was good too. I felt relaxed and appreciated.

Anyway, there will be some dyeing taking place over the next couple of weekends.

Our next show will be the Bakewell Wool Gathering on 17/18 October, and then the Kendal Wool Gathering the following weekend, 24/25 October. I will be there at both with my fibre, my sock yarn, and copies of The Old Handknitters of the Dales as carefully updated by Penelope Hemingway.

After that, all my remaining stock will be gradually put on to the Etsy Shop.

Do remember, of course, that you can always get in touch if there's a specific colourway or fibre that you would like, or you perhaps a special order of a larger amount - a sweater's worth, for example. All my colourways are here (2015), (2014) (2013), and I carefully record the recipes I use so that any colours from the last few are repeatable. And I am always pleased to do commissions and match colours.
Posted by Freyalyn at 09:02 No comments: Links to this post

White bfl dyed in a new blue and brown colourway

The fabulous merino d'Arles in Triton

White merino in cool blue/greys and a cocoa-brown
Posted by Freyalyn at 19:25 1 comment: Links to this post

I've had this CVM fleece for over a year now. It was a bit dry and sorry for itself when I got it (washed a little too harshly I think), so I rejuvenated it by giving it a bath in very (I mean very) hot water with a tbs or so of olive oil dissolved in it with a drop or two of dishwashing liquid. About twenty minutes in this, then a spin and dry, and it was much happier.

However, still a problematic fleece. Beautiful softness, beautiful crimp, a nice range of colours along the cafe-au-lait theme, but very short and very disorganised. I've combed it bit, but although that makes wonderful yarn there's appalling wastage and really it's too short. I've hand-carded, which would ideally be the best way of dealing with it, but I wasn't feeling the love. So today I got Mark to haul the drumcarder down and had at it.

I usually load the drum initially, not by feeding through under the small drum, but by holding the fleece directly to the moving big drum. I find this opens up the fleece nicely, doesn't strain or break the individual fibres at all, and allows me to spread it evenly. This is what it looks like at first.

Have to be careful not to load too much; when it's taken off into its first batt, it'll spring up and out.

Once the first batt's carefully taken off the drum, I split it in half lengthways and feed that through back on the drum in two halves. This is the subsequent batt on the drum.

And this is it off the drum. Still a few neps, but nicely fluffed out and ready to spin.

However, there is a subtle range of colours throughout this fleece. You can't really see in this photo, but this pile of batts does have a range of colour between them, and I want it a little more homogenous. So each of these is split into two, and they're fed through on the carder again, using three of the half-batts to make a new batt.

This gives me bigger batts and slightly more blended. The wool's been through the carder three times if you count the initial loading, and is well opened-up and organised.

Half the fleece I had remaining in the bag was a slightly darker beige/brown, so that was processed as a different half. There was much more variation within the two-pass batts for this colourway, so I had to put it through again to even it out.

I've ended up with about 500g of carded wool, in a pale warm cream and a darker cafe-au-lait shade. There's about seventeen batts.

I'm always very wary of over-processing wool through a drumcarder. Past a certain point, even the strongest wool will start to stretch and  break and fill the resultant batt with an increasing number of neps and tangles. Drumcarders are not a magic tool that will take grotty fleece and instantly turn it into beautiful, fluffy, smooth batts of clean wool; it takes careful washing of fleece and considerate handling of the carder and wool to get anything nice at the end.

Of course, blending colours and fibres of already-prepared fibre, or commercial tops, is an entirely different story.

Posted by Freyalyn at 16:13 2 comments: Links to this post

Nearly there: Fibre-East is this weekend. I was teaching at Craven Guild in Skipton this Saturday just gone, and on a lovely retreat (mainly of spinning and eating and catching up with friends) the weekend before, so there has been much fraughtness associated with trying to get all the yarn and fibre packed for this weekend. I'm there at last - and reasonably satisfied I have enough wool.

Like many other people who do these shows, I use the large transparent zipped Ikea sacks to carry fibre. In my case, the bags are almost exactly as deep as my packets of fibre are high, so they stack in the sacks neatly. I like to have eight of these to do a show with, and I have eight. OK, two of them are a little saggy, due to the enthusiasm of the Craven Guild, but that's OK - some of the others are bursting. And I have an overflow of sock yarn out of its wicker hamper and into another small sack. Plus a few copies of Penelope Hemingway's Old Handknitters of the Dales, and lots of little bags of scoured and dyed fleece. There's a few bags of handdyed tussah and bombyx silk tucked away too.

So yes,I can relax.

So here's a quick review of some of the stuff in the last packing session.

And Blackberry over white bfl/silk

And a new one: Distance over white bfl/silk

Distance over grey shetland/silk (a bit washed out I'm afraid)

Macaw - probably my brightest at the moment - on grey shetland/silk

Macaw again - Dorset Horn seems to be more brilliant than any other of the wools I use. This would make fabulous sock yarn!

And Peacock Butterfly gradient over white bfl - it really is as gorgeous as it looks!

Posted by Freyalyn at 06:58 No comments: Links to this post

This is Dragonfly over black BFL and silk - I wasn't sure it would work but it seems to have come out rather well. I need to do more yarn in this too.

A bit more Magenta Mouse, on white bfl/silk, and oatmeal in both plain and with silk.

Northern Lights over black bfl/silk. This colourway has been with me since the earliest dyeing-to-sell, and it's still popular. It looks like just the primary colours, but on spinning all the secondaries and tertiaries appear like magic!

Dorset Horn, dyed in Grail. Yes, it really is that brilliant! I can see this making fabulous socks. Dorset Horn is a crisp springy Down-type wool, and ideal for things that need to wear well - like socks.

The same colour, muted a little over grey Shetland/silk.

Peacock, on both white and oatmeal bfl.

A new colourway - Noctilucent. This reminded me of the colours in noctilucent clouds, which I've not managed to see yet but will some time. On Dorset Horn and grey Shetland/silk.

And finally, Gothick dyed over the lovely natural moorit Manx. This is such a strongly coloured wool (at least in top form) that I have to be quite careful on which colourways it will take - blues just don't work at all, greens are excellent, and purples come up beautifully muted.

Posted by Freyalyn at 20:23 No comments: Links to this post

I love this subtle differences in colourways depending upon the base fibre. This is Guinevere on both white and oatmeal bfl/silk:

My camera really doesn't like bright reds. This is Warrior Scarlet on white bfl. I was aiming with this colourway to hit the orangey-scarlet side of red, rather than tip towards the pinky-blue tones. I think I've managed it.

And the same again, on white bfl/silk. Look how the silk shimmers in and out of the more matte wool.

Haven't had this colourway out for a while. Willow, on Merino d'Arles

And this is what Willow looks like on grey shetland/silk

True Blue dyed on Merino d'Arles - this is a very intense and bright colourway on white wool, but over the biscuity tones of this wool it's rich and muted.

But this is what Oakleaf looks like on white bfl:

Path in the Woods on oatmeal bfl/silk. Purples and greens are always popular.

Anyone managed to see Noctilucent Clouds in real life? I'm rather happy with the way I've captured the colours here on oatmeal bfl/silk.

There we are, another round up. The Etsy shop is currently empty as I'm gathering all my fibre up for Fibre East at the end of July. But, as ever, should you want to buy something here or have an urge to have a colour on a particular fibre, just let me know - if I haven't got it in stock I can always dye it up for you.