Lots of things to photo - more socks on the go, the neckwarmer for Vicky - but I've been to lazy/disorganised/cold to do any yet. However, I now don't have to take the camera or card into work so they might get done this weekend. I have a whole weekend at home in front of me - apart from a trip to Ikea on Saturday (which would be horrible apart from the fact we can stock up on meatballs and they do the most amazing almond cake, not to mention Christmas presents) and the farmers' market on Sunday morning and Harlow Carr later on Sunday. We need transport this weekend so a van is being hired again.

Why am I burbling? Off to warm up downstairs before my fingers go numb.
Posted by Freyalyn at 17:34 No comments: 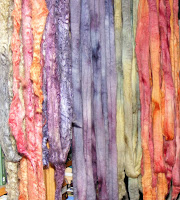 Out of the dyepots over the weekend - I have a lovely lady who order fibre from me for Christmas presents to her spinning friends. There are four lots here, each one consisting of 200g of fine merino and 50g of camel/silk, two of Redleaf, one Damson and one Moss. The colours are actually richer and darker than the photo appears, but it was taken by flash in poor light last night so it's flattened out a little.

Posted by Freyalyn at 11:35 No comments:

Finished stuff, and spinning at last!

The Elsewhere cardigan finally photographed - I've given up hope of being organised enough to do it on me and in daylight. I've worn it a couple of times and I'm really pleased with the shape and drape, but slightly uncomfortable with the colour, although Ma said it looked good on me. I think it's a bit bright. It will be made again, I'm sure.

This hasn't been worn yet, but I'm sure it will get lots of hammer in the future. I've tweaked the pattern, as I didn't like the garter stitch edging at armholes and bottom, so I've done a stocking-stitch hem with a purl turning row - much better. Long too, but also quite snug - without really trying too much I seem to have got the body size spot on. 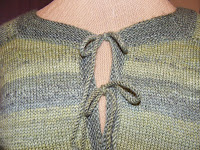 And a detail of the neck ties - twisted and cabled self-yarn. 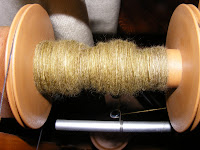 Started spinning this last night during Defying Gravity - I do enjoy spinning (or other anachronistic crafts) when watching sci-fi, it's such a rubbing-together of different universes. This is moss coloured cashmere that I dyed a few years back and then kept back from selling because I liked the colour so much. But there's very little - probably less than 50g - so I'm still debating whether to ply with itself for a very small amount of yarn or run it along another single. There isn't enough to sample. Not the easiest spinning - I had the Suzi on its highest ratio without the accerlerator head and a very light tension, and fluffed up the top preparation so I was nearly spinning woollen with a long draw. There's some pleasing irregularity to the yarn, but that may largely disappear in the finishing.
Posted by Freyalyn at 09:31 No comments:

Sometimes I really don't like my cat.
Posted by Freyalyn at 08:58 4 comments: