Teaching and spinning and shows, oh my...

Goodness me, lots of things have been happening. But I keep forgetting to take photos, or even ask other people to take photos, and then without images I don't get around to blogging about it.

We had a fun day at Wharfe Wool in Ilkley on 7th May; small show, but some nicely picked stallholders. And of course it's only twenty minutes from home. We didn't even have to worry about the dogs, as Mark popped home after we were all set up, and came back for the afternoon.

Then there was the Tynedale Spinners' Gathering on 21st May. Long drive for this one, but always worthwhile, catching up with friends and stunning scenery all the way up there.

Leeds Wool Festival was at Armley Mills on 4th June. This was just like a garden party with added wool! Fabulous weather, really interesting things to look at as well as the other stalls, an amazing WI cake stall (probably the best bit!) and again, lots of friends to catch up with. We forgot a vital part of the stall - a newly made display board - but luckily this show is near enough home for Mark to whizz back for it and return before opening!

I tried the new look stand out at Armley this year: 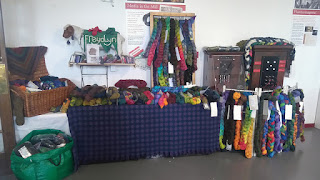 I've moved away from the white table covers (they're now all dyed green/teal), using one of my Welsh blankets, there's a couple of small folding chairs from Ikea to give height, and my fibre is now braided rather than bagged.

I thought hard about braiding rather than keeping it in bags, but most fibre eventually felts in bags too, and they don't display the colours and the fibres at their best. Obviously the braids take up much more space than the bags, but I think they look vastly better. They certainly seemed to catch attention at Leeds; let's see what happens at Fibre East. Mark's making me another display screen too. 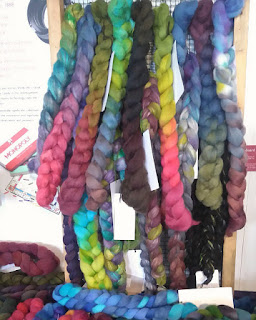 And I had another workshop at the end of May, teaching at North Cheshire Guild. I did a dyeing workshop there a few years ago; this time I was doing my Hand Carding and Long Draw Woollen Spinning workshop. (My oldest workshop, and the most fun to teach). It's also the one that needs least stuff bringing: my wheel, box of hand cards, bobbins and kate, a suitable fleece, and my box of yarn and fabric samples. Oh, and various garments to show the type of yarn produced. 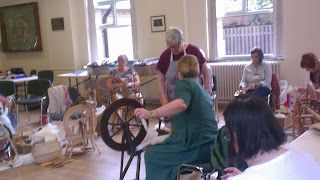 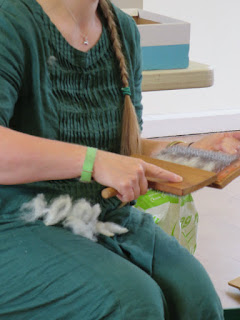 Someone actually took photographs for me. There were some excellent ones of spinners really getting the hang of long draw, but as I don't have specific permission to post images of them, I'm afraid you can't see them. But the workshop went extremely well.

So now I'm in the lull before Fibre East, and a workshop at Peterborough Guild the weekend immediately afterwards (must be crackers!).

My little bags of scoured and dyed fleece took a tremendous bashing at Leeds, so that's the main thing I'm dyeing up before Fibre East. (That, and sock yarn).

Mark and I went up to Wool on the Wall today - not only did we have a good time catching up with people, but I sat and spindled for a while, enthused about spinning to passers-by, helped give advice to a sheepfarmer about his Black Welsh fleeces, but I picked up a longwool cross fleece and a very nice North of England Mule fleece to be dyed and bagged up.

And it's Tour de Fleece at the moment. Spinning has been happening (I missed spinning in May and June due to a sudden and enormous knitting commission, which will be written up later) and will be documented when the Tour is over.