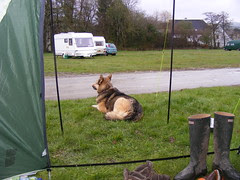 This was the only photo I got around to taking at this year's Wonderwool.  It rained, and was windy, and rained some more, was extremely windy - and bloody freezing.  I ended up wearing layer upon layer down at the stall (two skirts and trousers, woolly socks and walking boots), including my Leaf Coat, which only got taken at the last minute but I was really glad it came.

Naturally, the room in which I was teaching both days was overheated, so nearly everything had to be stripped off then replaced for the trek back down to the halls.

But it was great fun - we saw lots of friends, met new ones, ended up eating out in Builth with Denise for two nights because there was no catering on site in the evening ('The Lamb', excellent basic pub-type food), and the tent survived - we remained dry all three nights.

Poor Bil got cold and damp; he was extremely glad we'd brought his pyjamas.  Lunil sat out in the rain whenever she could, and watched the world go by, getting up to investigate most of it.

I did not need to buy fleeces.  So naturally I came home with half a creamy-beige Corriedale ewe's, and an unusually pale moorit Manx.  Neither of which have been washed yet.  And some expensive naturally-dyed blue/green alpaca sock yarn from The Mulberry Dyer, dyes in turquoise, olive green and magenta from the place I usually stock up at, and some dyed yak fibre from Mandacrafts.  Extremely restrained, which was the idea really.

To add insult to injury, driving home yesterday we hit sunshine and blue skies as soon as we'd left Wales.  Our tent dried in an hour on Ma's washing line.  Bah humbug...
Posted by Freyalyn at 17:10 No comments: