on August 31, 2021
It's over a week since I got back from Summer School, and the last day of August, so I'd better bash out a blog post while it's all still fresh in my mind.
What an amazing week that was! I've not attended the WSD Summer School as a student before now - I've been as a vendor to the trade fair a couple of times, and once as a judge for the spinning CoE, so it was a very different experience. Of course, in these Covid times it was going to be a difference experience anyway.
I've been wanting to learn about dealing with flax for a while, so when I found out last year that Riita Sinkkonen Davies was going to be teaching about flax and turning it into yarn and fabric I was desperate to go. Summer School is vastly expensive (not for what it is, but for a week's 'holiday' it's much more than I'd usually pay) so I was extremely lucky to get a bursary on my initial application, and then a place in Riita's class.
Poor Mark had to drive me all the way from home to Writtle, near Chelmsford, and then take himself and the boyz back home on their own. It was a long hot day, and the car was full of stuff. But once I was there it was so peaceful - I had a first floor room (with a typically uncomfortable student bed) with this view out of the gardens. And lots of sweary seagulls around all the time. 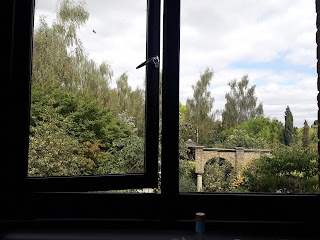 On the first day Riita introduced us to flax - the different colours it comes in due to where it's grown, type of flax, and type of retting. These beautiful colours below are all grown by Riita: same place, same flax, just different years. And yes, it still surprises me  how few people realise why 'flaxen hair' is called that! 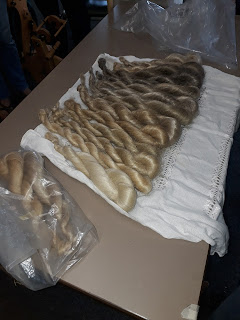 We made cones for our distaffs and dressed them with stricks of flax from Lithuania (Riita had brought lots of flax from different places). I'd brought my (probably Norwegian) old flax wheel, which just sang wtih joy when she realised she was spinning real flax again. 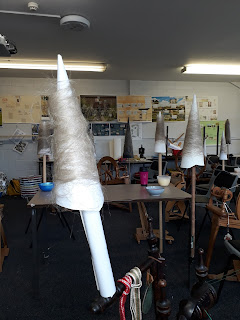 And Riita had proper flax processing tools too. Some of our group went to a local farm that grew flax on the free Wednesday afternoon, and brought back armsfuls of retted flax that we processed there are then. (It made a very golden fibre). 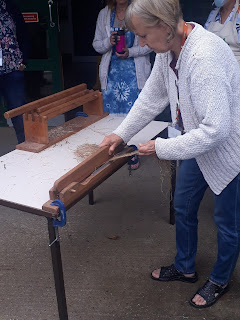 We had hackles to play with, too. In my bag of flax (I'd been collecting for a while) I had a big hank of processed but unhackled flax - look at the difference! 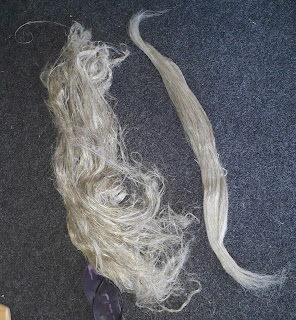 I made some cordage from the waste from hackling. 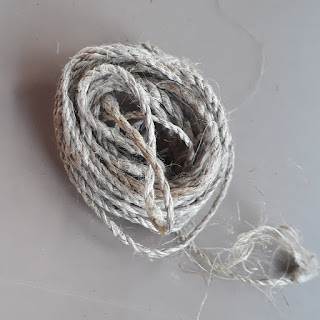 This is our class photo - just after Riita had distributed flax stricks she'd received from the Berta's Flax Project. Many of us (myself included) had already heard of this, and already received flax, but it was good to spread the word. We made the decision as a group to be unmasked within the classroom provided all doors and windows were open. 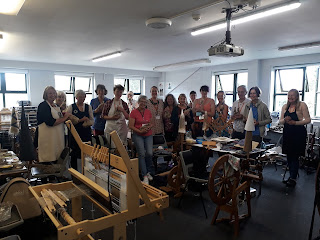 Six of our class members had been asked to bring table looms which were warped up with millspun linen warps brought by Riita, and we all took turns in using our own linen handspun to weave sections on each loom. Much organisation was required to make sure that everyone got their own section back after cutting off and rinsing.
I didn't get involved in that; I was much more interested in producing yarn. I did make an short length of warp-faced braid, and then a longer strip of open-weave, on my inkle loom. 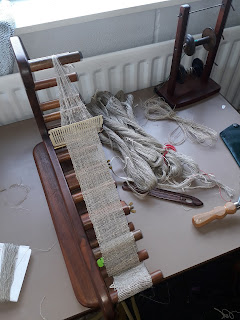 I
I'd been asked to bring one of my electric ring cookers so we could boil our yarns in a soap and soda solution. After much palaver when I couldn't find anyone to PAT my existing rings, I ended up buying a new one. I ended up taking charge of the whole boiling operation.
This was my final production tally at the end of the week; doesn't look like much, but the information I have absorbed from watching, listening, reading, is amazing. I can't wait to do more. 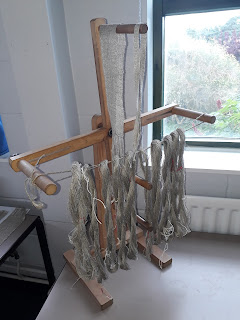 Writtle college was a lovely place - amazing plants all over the place (wonderful for the eco-printing group), greenhouses, romantically overgrown shrubs and flowerbeds everywhere but the lawns had been maintained so it was all wanderable-through. Apparently this is the first event at the college since lockdown began last year, so there were a few teething issues. The food was perfectly adequate if a bit basic, though the 'gala dinner' on the last night was extremely tasty.
The displays for this year's candidates for the Certificate of Excellent were astounding, as you'd expect. The standard of work and presentation were excellent. I really ought to do this, but I know I can't dedicate enough time to it now.
I don't know if I'll ever manage to get the time or the money together to attend another Summer School, but it was a cracking event. I have huge appreciation for the organisers (and especially the convenor) putting it together so well in such challenging times. I did notice the rather nice bags and travel mugs and other gifts and souvenirs were all marked with Writtle and Chelmsford and WSD summer school, but not the date - luckily it didn't have to be postponed.
So poor Mark stuffed the boyz in the car and came down to retrieve me on the finishing day, leaving home very early and getting to me shortly after ten. The drive home was longer as there was more traffic, but it wasn't as hot. And then we had to drive two hours in the other direction on the following Monday, as I'd bought a table loom and stand on eBay. So that's my new adventure. 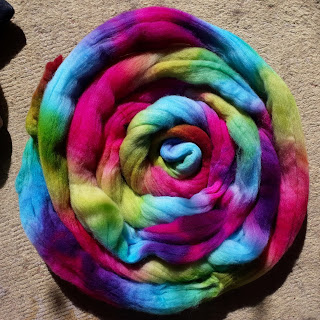 This is one of my most popular colourways at the moment: Away wi' the Fairies. I love it. There are only three basic dye colours in it, but they spread and run into each other and make lots more wonderful brights as the fibre dyes. This was done on Rambouillet, for me.  One of my favourite ways of spinning a fine wool top is to break it off into staple lengths, wrap them round a thickish stick like a big knitting needle or a nostepinne, and then spin the resulting prep long draw, at speed. I don't call these rolags, as they're much denser than a true rolag and the wool fibres themselves are still in a combed aligned form. But the resulting yarn can be spun to a very high twist, pulls out to a fine yarn, and is much bouncier and more elastic than a true worsted/short draw-spun yarn. # I spent an entire evening making these punis. I split the top down the middle as evenly as possible, and as each staple length was pulled off I carefully wrapped it round a 10mm knitting needle 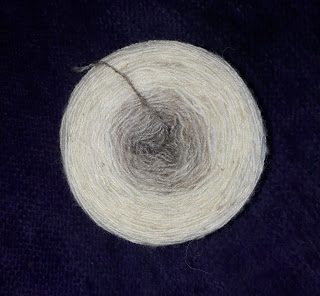 I have just finished spinning Boreray fleece into yarn. There's 100g washed weight here, 450m of what I'd call heavy laceweight or light fingering yarn, with a gradient at the end (or the beginning). I love it, and now I have to decide what to do with it. This wool came from Orkney Boreray - this year Jane has some exceptionally nice fleece that deserved to be handspun.  This is what it looked like skeined, with a 20p piece in there to show thickness.  And this is straight off the bobbin and unwashed. It looks desperately overplied, but that's because the singles had been hanging around a bit before plying and had time to set their twist. I do like a yarn with high twist, which I think shows off the wool nicely but also makes it more hardwearing, whatever I do with it. Because it's woollen-spun, the yarn still has a soft, airy handle. About to be plied, both bobbins having been rewound. These are the Majacraft baby bobbins (not the lace ones), used with the lace flyer 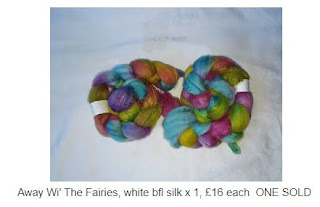 Goodness, it's nearly Christmas, and where has this weird year gone? In some ways it seems no time at all since March and the world closing in on us, and then I look in a different direction and it's so long ago I can barely remember.  I've decided to have a restart of all my colours,  so everything here is 10% and free UK postage!  Please don't leave a comment on the blog asking for fibre - I'm unable to get back in touch with you when that happens. Email me at freyalynn@yahoo.com with the one/s you'd like and I can come back to you with a price and a paypal invoice.  I shall keep the availability as up to date as possible. Both Away Wi' the Fairies now gone, sorry. Lower Festival obfl now sold TOP LEFT IS NOW SOLD  This Full Circle now sold, sorry  This Macaw is now sold!  And this one. The parrots are flying away! All this Peacock now sold, I'm afraid. Lower right, Pinewood/ExBF is now sold.  Thistle/Suffolk now sold.  True, bottom left is oatmeal BFL