Knitting from Fair Isle, and how to get colours wrong. And right. 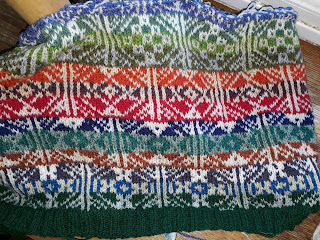 Just a few comments on the latest thing on the needles. The other day a long awaited book arrived: Knitting from Fair Isle, by Mati Ventrillon. Lovely thing. And I've been meaning to do something about my stash of pretty random Jamieson & Smith 2ply jumperweight yarns. These have been collected for a while, picked up from sales baskets or left over from previous projects, and I really wanted to do something about lowering the pile. (If you look in the picture below, you can see they are in a lovely wood cabinet. I can remember this from my grandparents' home in Devon when I was growing up, then in was in Mum's house for years until she gave it to me. I filled it with yarn - obviously. 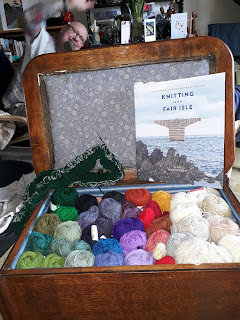 I pretty much cast on colours at random, and the bottom two pattern bands (Mati has an interesting version of 'traditional' Fair Isle patterning, clearly based on her machine knitting - deep bands of 24 stitch repeats) were just knitted as they came, with the only proviso that the pale colours were the patterning and the darker the background.
Then I realised it just wasn't working. I thought about the colours for the next two bands, grouping first orange/reds and then greens, and you can see how much more clearly it shows that the patterning is actually in bands and not just generic pale squiggles.
So I will do another band, in purple/blue, and then unpick the row below the first red row and knit the ribbing downwards from there.
So this is an example of how random colours just don't work unless you have a carefully curated group of colours to randomly pick from first. This selection of yarn is interesting anyway; there is lots of green (no surprise to anyone who knows me) but surprisingly little grey or blue. No pink, naturally. I have now started pulling the six colours I need for each band out before I actually start the band - three pales and three darks/mediums, making sure that the contrast colour properly contrasts. It'll be interesting to see what's happening by the time I get to the top of the body.
I'll probably do the sleeves together with steeks between them, just so I make sure the yarns match and I don't run out of any.
This was cast on 30th September, ribbing on 2.5mm, and the body on 3.23mm (I've already broken one circ (the nice carbon-fibre one) and I'm back on the ordinary but reliable Addis).
Posted by Freyalyn at 18:52