All the ideas I had for the next blog post. I have photographs and yarn and bits for one of different types of spinning from top, but it's still not sorted through in my mind, so I'll continue to look at the little skeins hanging up on the creel for a while yet.

So - there's a gansey kal going on this summer, over at the Guernseys, Ganseys and Knit-frocks group on Ravelry. I have more than a few things already on the go*, but I joined in.

I discovered the Manx gansey a few years ago - there's one example in the Isle of Man museum, and when I contacted the museum for more information, they very kindly send me a scan of a pattern for the gansey. I've subsequently (with permission) uploaded that to Ravelry, as the book is long since out of print. 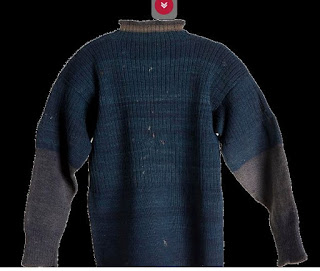 The pattern itself is slightly more elaborate than the photograph here, from the museum. This image shows a very plain gansey, mostly knitted in navy gansey-tytpe yarn, which looks to be naturally-dyed with indigo given the variation in colour. The sleeves are grey, which along with the repairs and hard-wear to the gansey itself, make me thing they are replacement sleeves when the original ones were worn and fraying.

There is ribbing from the upper waist upwards on the body leading straight into the neck, and for the top few inches on the sleeves. The cuffs, welt and collar are all in double rib, finished with a few rounds of stocking stitch. 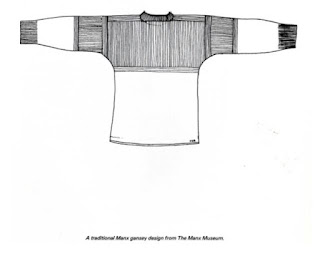 I can't find an example of the pattern knitted up. There is some difference between the gansey photograph above and the pattern - there is no welt to the body, just straight into stocking stitch. The ribbing starts much higher on the body and there there are a few horizontal ribs between the stocking stitch and the double rib on the body and sleeves. I have found myself wondering if there was one another gansey in the museum once, which would explain the differences.

For the gansey kal I thought I'd knit this pattern exactly as written, insofar as it makes sense. The pattern gives a tension but no needle size or yarn. But 7sts to the inch/28sts to 10cm is a good gansey-type gauge, and would give a sweater of about 38". I'm planning to do a slightly looser gauge, which will be easier on my hands, a bit quicker, and give a bigger finished sweater.

This is my stash of gansey yarn (part of the general reorganisation shortly after I was put on furlough from work): 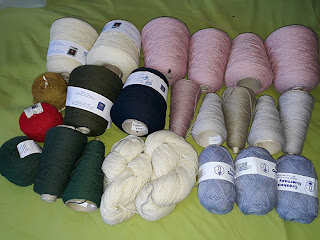 This is what the two smaller cones of the Frangipani Herring Girl Pink turned into: 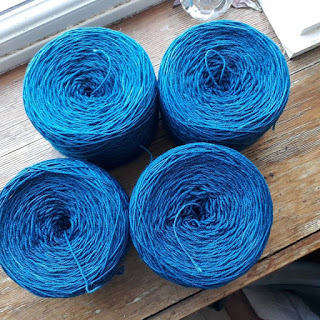 I don't do pink. I got these four cones of pink Frangipani cheap a while ago, as they've been stored in daylight at some point, and faded. So on Thursday I wound it into four skeins of about 180g each and spent the afternoon layering up navy and teal-green to give me this sea colour. It would probably have been easier to dye the white up, but I did buy the pink to dye anyway, and I thought the pink would add a nice warmth under the blue-green, which indeed it has done.

It's after nine on Sunday night. I shall put the colourwork shawl in Millarochy Tweed aside for the time being (but not for long, there's a lot to do for it and it has to be finished soon) and play with needle sizes tonight. 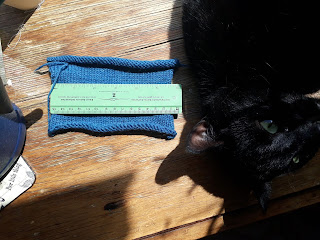 Quick update on Monday morning - swatch to see how the 3mm needles work. This swatch has been washed with soap and cold water, dried and measured, and then chucked in a 30 degree wool wash with a sweater. It's snugged up slightly, and the new gauge will give a final sweater size of about 42". Which will of course go smaller with a hotter machine wash. Nice easy fabric to knit too.

*Things on the go: Mark's peacoat, which only needs sleeves and lining and buttons attached, but it's hot and he won't need it for months; aforementioned colourwork shawl for a Kate Davies Design challenge; weaving that needs to be finished and off the rigid heddle loom so I can put something else on it that i've been asked to do, but there's 300g of spinning to be done for that other thing too.
Posted by Freyalyn at 21:24