Two thirds into the first month of the New Year before I manage to get around to a post. I had over a fortnight off over Christmas, surely the longest I've had since I've been working, but managed almost nothing creative as I managed to get the vile lurgy that's been going around, so I coughed and sneezed and ached my way along. As did Mark, in a slightly different way.

But I seem to have been inspired since the first full weekend of the year!

This is the spinning for a Sarah-Dippitty skirt, which I have been thinking about it ever since Sarah Swett has been blogging about it. I shall probably do a quick short one with commercial yarn first, but this stuff is on the go for a long one. It's a fleece I bought at Wonderwool 2017 from Olga Veever's flock of Corriedales. It's a fairly short and very soft fleece in a beautiful warm dark brown. I drumcarded it, leaving in the bleached tips which have left rather nice neps in the finished two ply yarn. Combing it would no doubt have made a darker smoother yarn, but I wanted a very light open yarn with lots of yardage, so a woollen prep spun long draw gave me exactly what I needed. There is a lot of twist here, both in the single and even more in the ply. Once I've spun it all up (apart from a double handful of fleece which I've left to comb and spin for the sewing up) I shall sample. Sampling is fun! 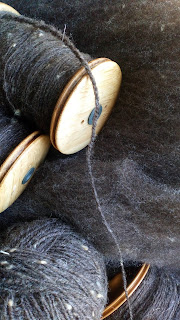 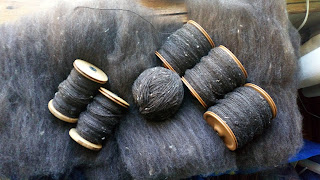 And this is my new toy. I treated myself to a narrow rigid heddle loom (the Ashford one) from The Threshing Barn at Yarndale last year. (I had one years ago, but it was the wide one and was just too big to get out and use easily in my somewhat full and cramped flat, so I sold it on.)  This is a narrow one, and it was finally pulled out and played with.

I dug into the various boxes of handspun stash and hauled out a random assortment, and wove five narrow strips. These aren't the full width of the heddle (I left about 10 slots each side) but it was enough to play with. The length is from the small table in front of my chair to the dresser on the other side of the living room.

My selvedges improved dramatically as I carried on. The two shorter strips on the outside were the first two, the green in the middle was the other night. And I stitched them together with mattress stitch this morning.

The fringes were great fun to do.

And I have more yarn. Lots more yarn. This could get addictive. (I'm currently sitting with this round my shoulders as I'm about to cast on a hat* (having taken the boyz out for a walk in the cold and frost this morning, I had a shower (brrr!) and am currently in my dressing gown. It's ceilidh night tonight so no point getting dressed until we go out). 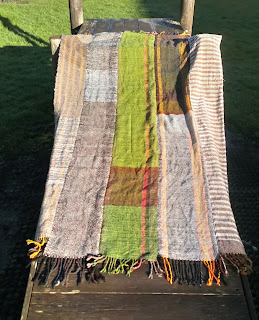 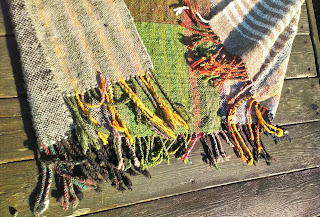 *The hat is Liz Lovick's Australia Ablaze. Really, lots of us should be buying the pattern and making it.
Posted by Freyalyn at 14:51