Knitting at the Wordsworth Trust, teaching at Durham Guild.

It has been a very long weekend. We had a desperately early start on Saturday morning, got up to Durham in plenty of time for me to teach a colour blending/drumcarding workshop at the Guild, then whizzing down to Settle for a concert at Settle Victoria Hall with Kris Drever, and home at midnight.

Then we were off early on Sunday morning, up to Grasmere where I had a lovely few hours in the library at the Jerwood Institute, Wordsworth Trust at Dove Cottage, in a talk and workshop by Esther Rutter. Esther has recently published This Golden Fleece, and has been giving talks and workshops around the country. This one was looking at the magnificent 19C gloves, typical of Westmoreland and the Yorkshire Dales, in the Wordsworth collection. There were about twenty of us in the group, and we got to look at wonderful things.

These were on the shelf immediately behind my chair. I nearly fell off it! 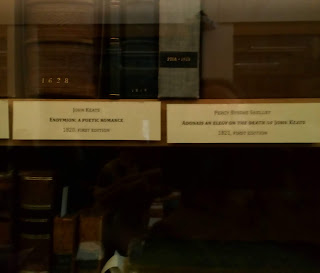 These are a few pages, with sewn in samples, from Wordworth's niece's commonplace book. 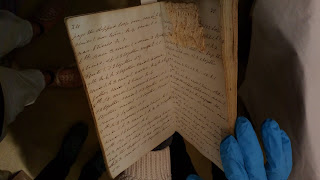 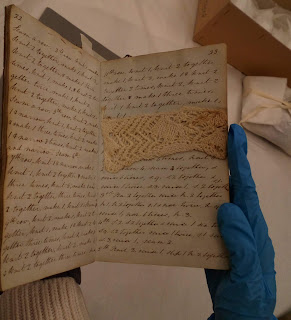 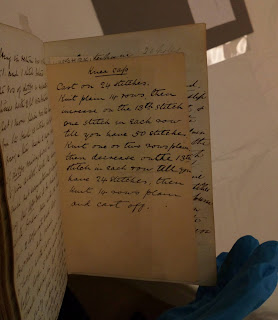 The Wordsworth Trust is rightly proud of having nearly all the papers and the family documents in the area where they were written, and around the places they were written about (instead of tucked away in the British Library in London).

There is a selection of knitting sheaths/sticks in the collection too. 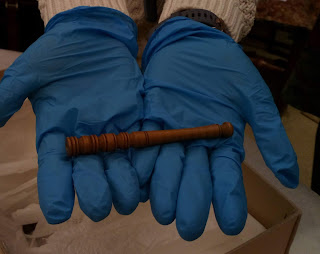 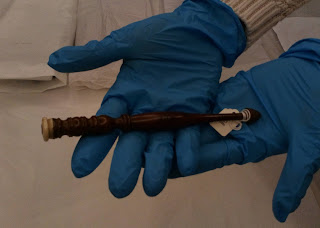 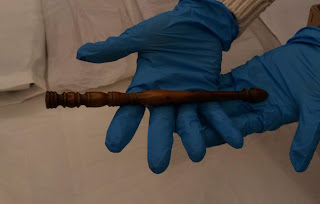 And the gloves! Beautifully detailed gloves. I've seen photographs, but it was amazing to see them 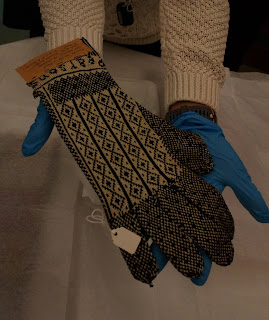 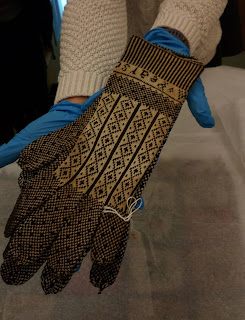 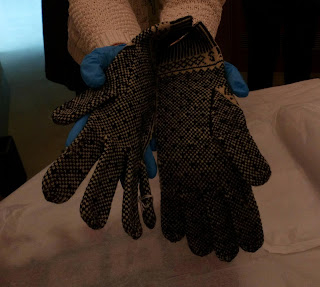 A hand-knitted rug/blanket, dyed with natural dyes, made for William himself. Much brighter on the back, it was on display until the 80s and has been rather light-faded. One particular square looked like it was knitted in stripes of browns from the right side - on the reverse it was much darker and in shades of purple, so probably various yarns dyed with logwood that looked much the same when new. 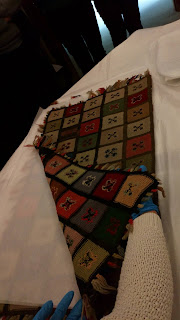 And after this we were provided with yarn and needles and handouts, and we all started knitting a version of these gloves ourselves. Esther had not only brought all the samples that she knitted as she wrote her book, she'd done an excellent handout for the gloves. I got most of my ribbing done, but I have to finish the Carousel Cap first.


And then I met up with Mark (who had been pottering round the village while I was busy, and we walked around the lake with the boyz. Arthur was utterly delighted at being able to play in the waves (it was windy) and launched himself into water with gay abandon. 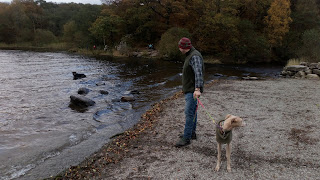 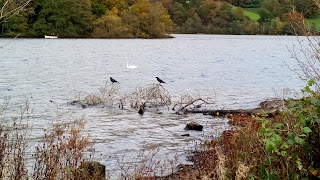 Posing. (There is a stick just out of shot.) 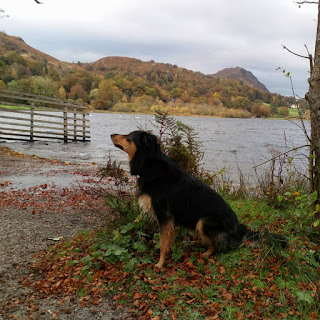 There were supposed to be photographs of me teaching at Durham on the Saturday, but Mark hasn't sent them to me yet. The workshop went really well, and I've already been booked for next year. It was very strange actually teaching there - I must have walked past St Oswald's Church Institute dozens of times on my way up to the library from my college, back in the 80s, but I can't say I'd noticed it. (They didn't buy much fibre though.)
Posted by Freyalyn at 20:41