So this is the Carousel Cap I was working on the other week. I'm really pleased with how this has come out, especially fabric-wise. The J&S Supreme blooms beautifully with a bath in very hot water and a good rub on itself. The BFL/silk shines against the matte of the Shetland. This one is being traded with a friend; I've already got an offer of a bottle of nice gin in exchange for another one but with unicorns instead. (I think I want one with unicorns too). 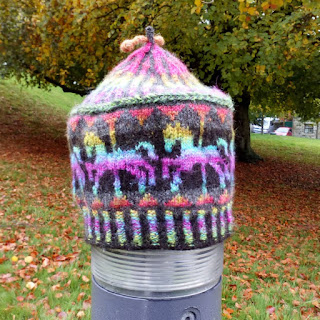 Last weekend we had a furiously fast visit to Edinburgh, staying in our usual flat on Easter Road, and wishing we'd brought the dogs too this time. The flat is dog friendly, albeit on the third floor, which is why we chose it originally. (We've been going to it since EYF in 2016).

The main reason for going was the Late Prehistoric Group's conference on Crafting Identities on Saturday, but I also really wanted to see the National Museum's Wild and Romantic exhibition. We scorched up the motorway and the A7, getting there for not long after 11, and after dumping stuff in the flat (uncleaned, but we get leeway as we've been going so long) charged up the hill.

Excellent exhibition. As you'd expect really. A wonderful overview of how Scotland's become regarded as the wild and romantic country par excellence since the 18C.

There was clothing, in good enough light and in a small enough case that you could get a really close look. 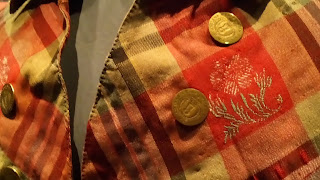 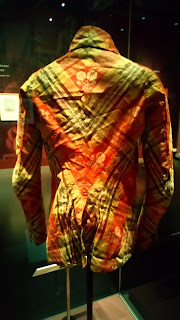 There was a very old suit of tartan that is supposed to have been booty from Culloden (very small, and different tartan/fabric for the hose and jacket), that wonderful 18C wedding dress that's been worn by every bride in the family since it was made, and I subscribed to the crowdfunder when it was replicated in a day at the museum earlier in the year), and various jackets and costumes right up to the 'classic Victorian Scottiana'.

And some of the random stuff was interesting too. More than one of the cartoons satirising Scotland from the mid 18C to the early 19C showed Scotsmen like this - tartan or checked jackets but a plain plaid/kilt, yet now we think of the jacket/top being a plain wool and the kilt always tartan. 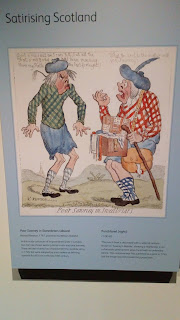 I could have spent far longer at the exhibition, but we had to meet someone off a train. And then we were tired, so went back to the flat for lots of tea. And a yummy meal at the Mash Tun just downstairs - local, good value, excellent food, lots of gin and whisky.


After the conference on Saturday, which was all day and such a pity to be inside on such a gloriously clear and chilly Autumn day, I met Mark at the Deacon Brodie's. It was furiously cold and breezy (Mark had bought me a beautiful Black Watch blanket as a late birthday present, so I wrapped myself in tartan wool and was happy) and this was the view back down the Royal Mile, all the way to the Firth, the last of the orange sunlight just catching the top of St Giles. 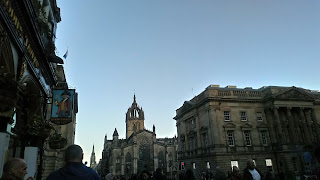 Autumn is firmly upon us. Some trees are nearly bare and I've hardly noticed the leaves changing on some. I could really do with a weekend at home, as before Edinburgh we were charging around to Durham and Grasmere. But this weekend (in fact, ridiculously early tomorrow morning) I'm off with a friend to Leiden for the Historic Knitting Group's conference. Which is going to be vastly interesting, and I should manage to get visits in to the Textile Research Centre (normally closed on Friday, but we have contacts!), plus the Weavers' House on Sunday afternoon, and hopefully the Archaeology Museum in Leiden on Sunday morning. Our flight home is late on Monday, so I'm keeping my fingers crossed we can manage the Rijksmuseum on Monday.

Phew. And then I'm teaching at York Guild in a fortnight and need to knit up a beaded yarn I spun weeks ago before that. 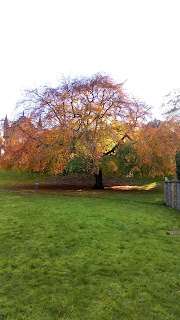